By this time the school had completed a number of projects to the school site.  These included the many playground improvements kindly funded by PSA, a new extended kitchen to facilitate onsite cooking from fresh, and an additional classroom to enable us to take our three-form reception year in 2010.  There were also plans in place for a permanent shade structure over the outdoor KS2 table/lunch area and after planning permission was granted this was installed during the Easter holidays.  It provided a large area of much-needed shade/rain protection in the KS2 playground.  Plans were also in place to convert the two group rooms at the end of the ground floor corridor into one large area which was completed during the Easter holidays. 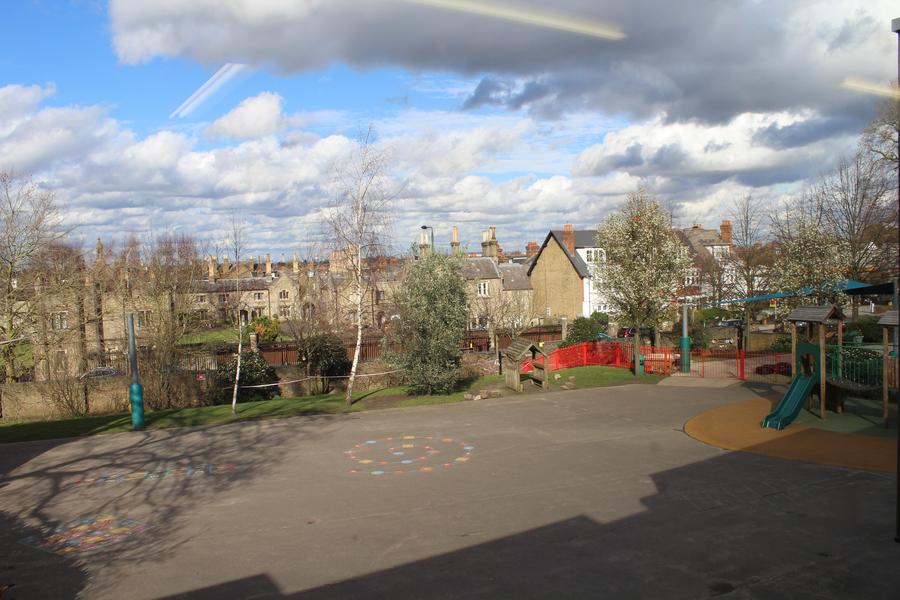 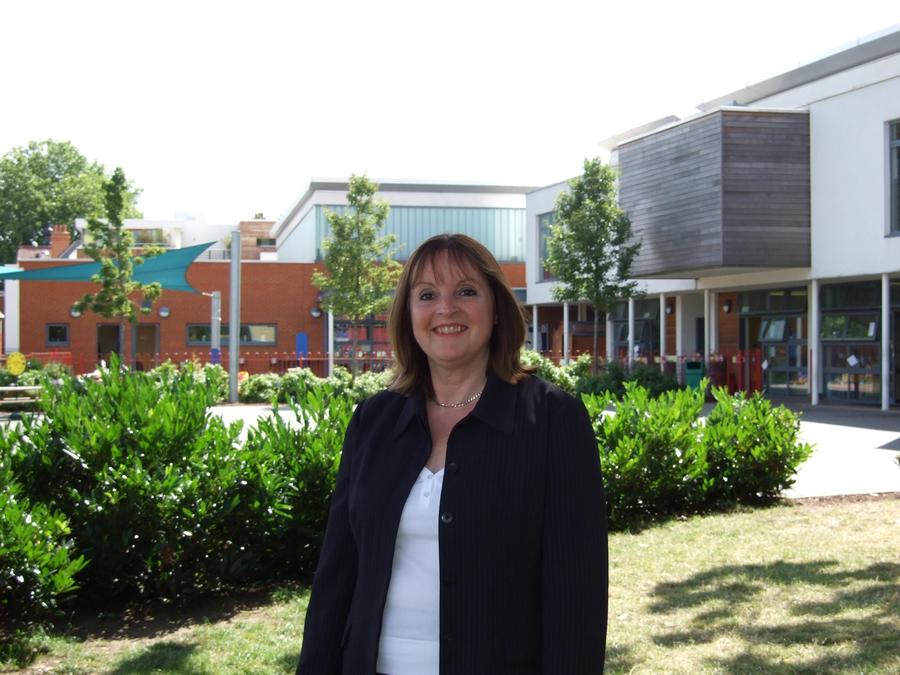 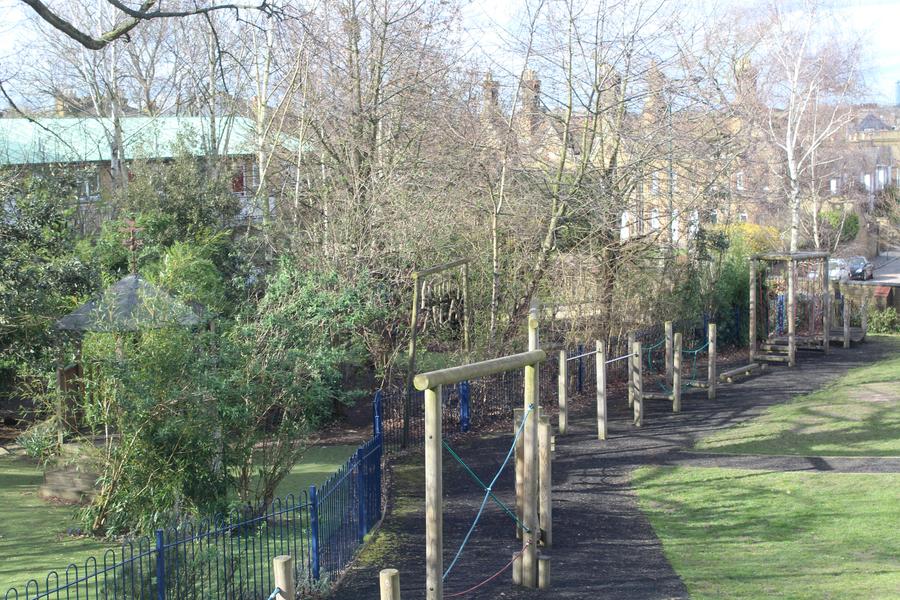 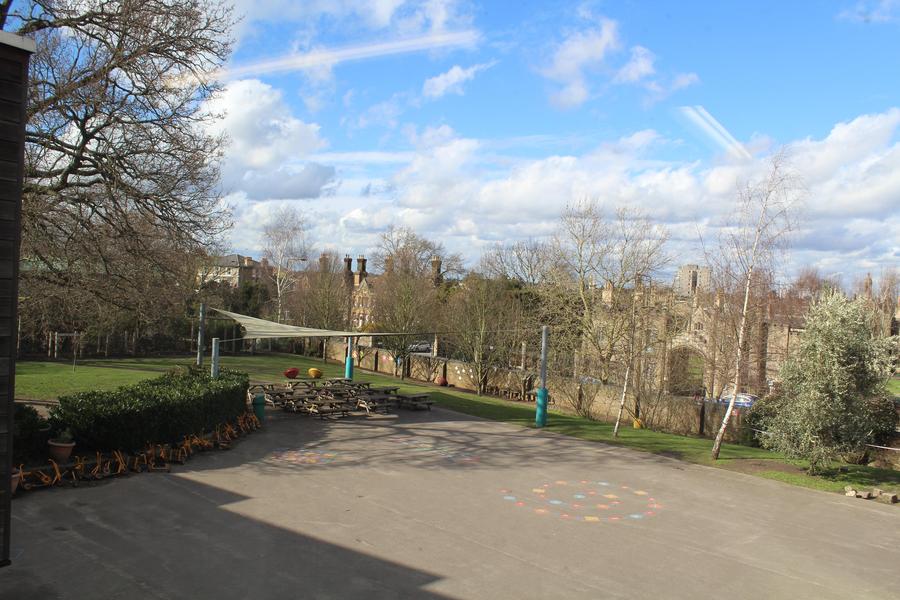 At school the children took part in a range of celebrations, including a royal performance in the KS2 Drama area, and learned about the sorts of games the children played in the 1950's. 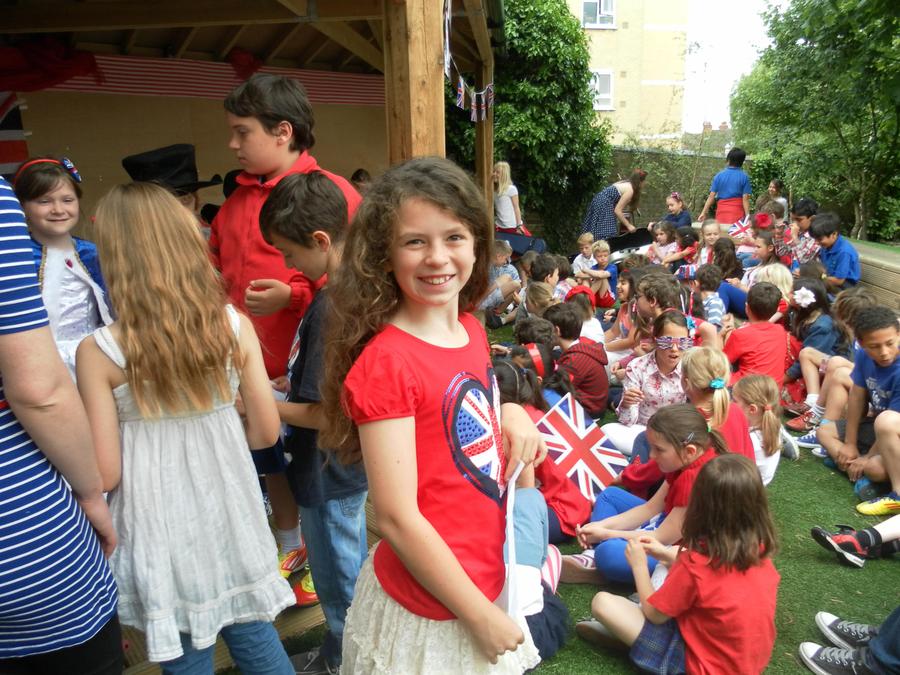 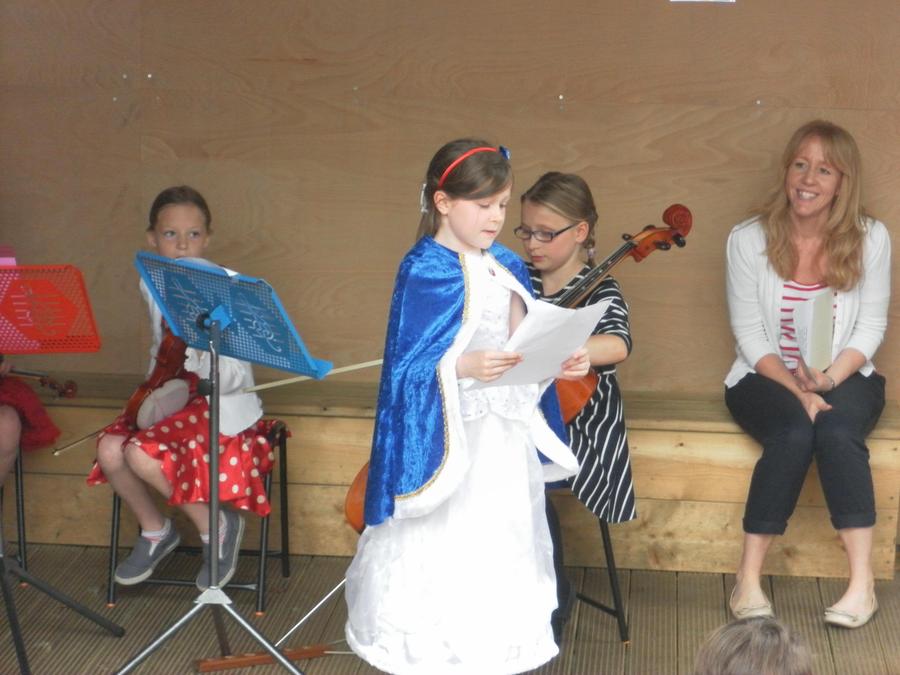 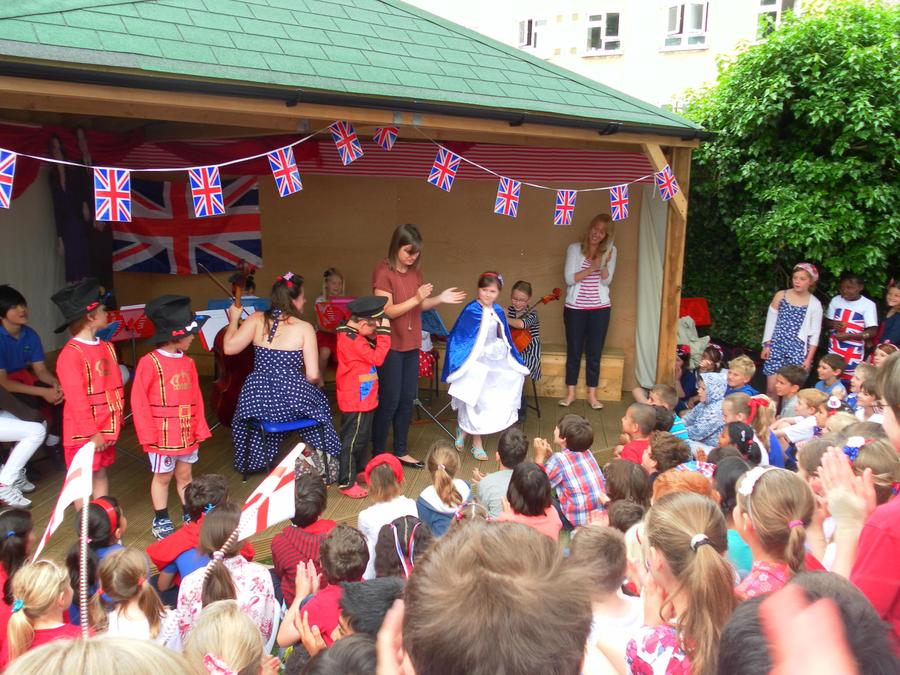 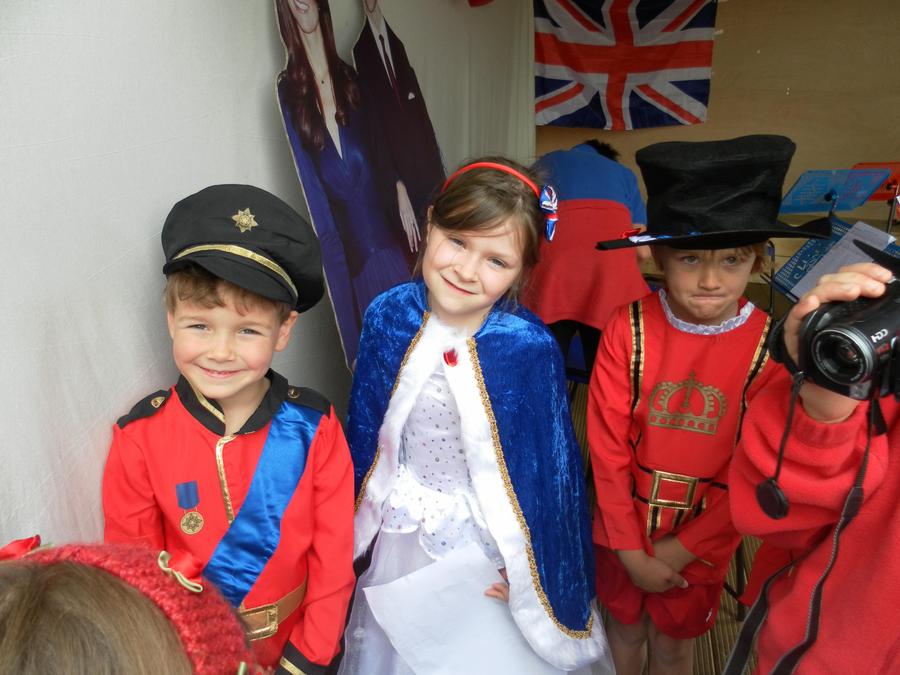 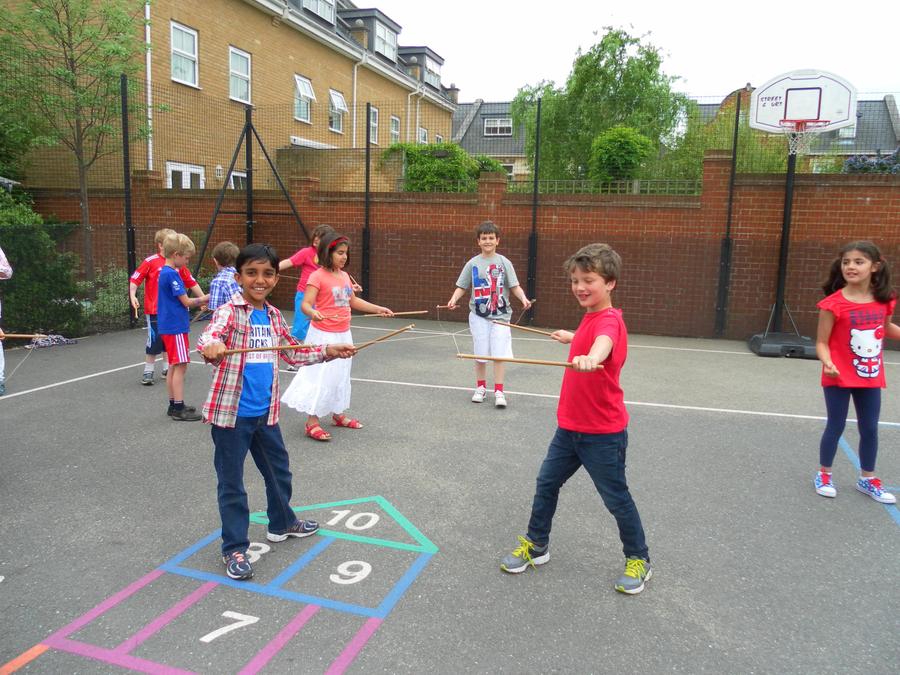 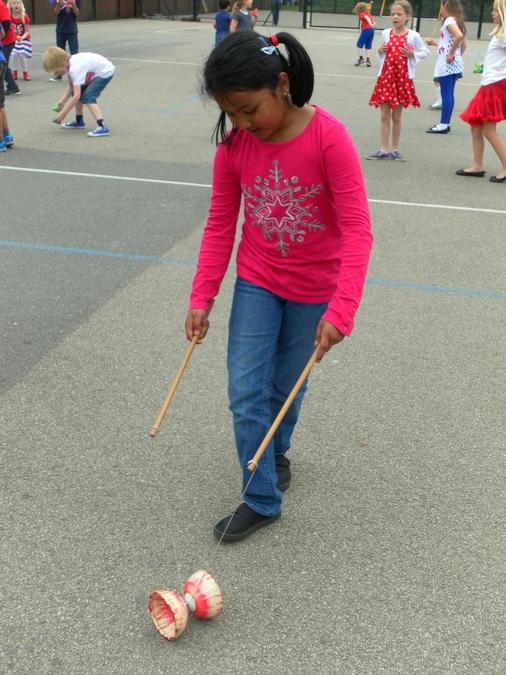 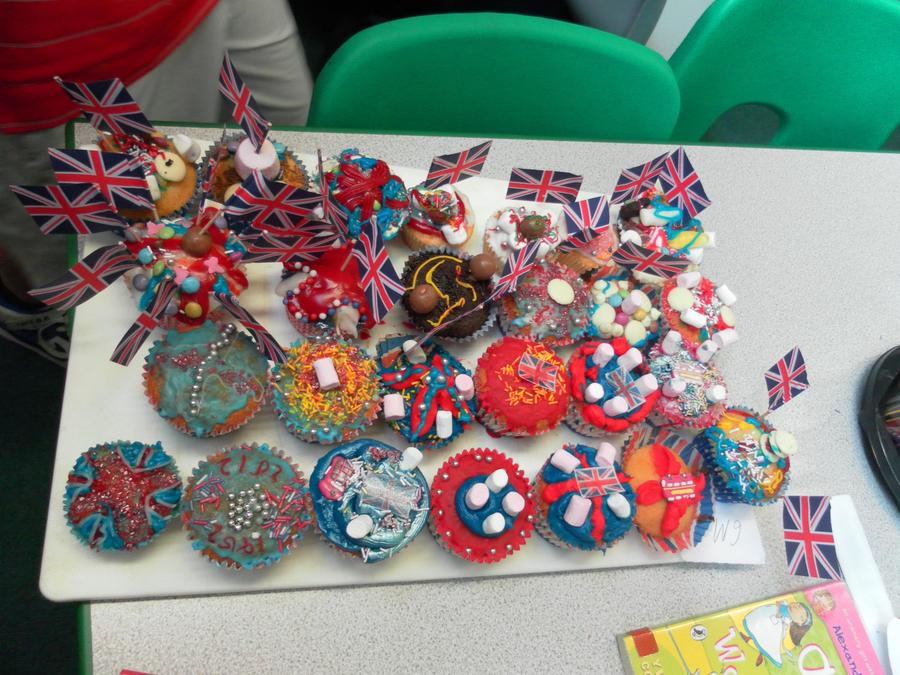 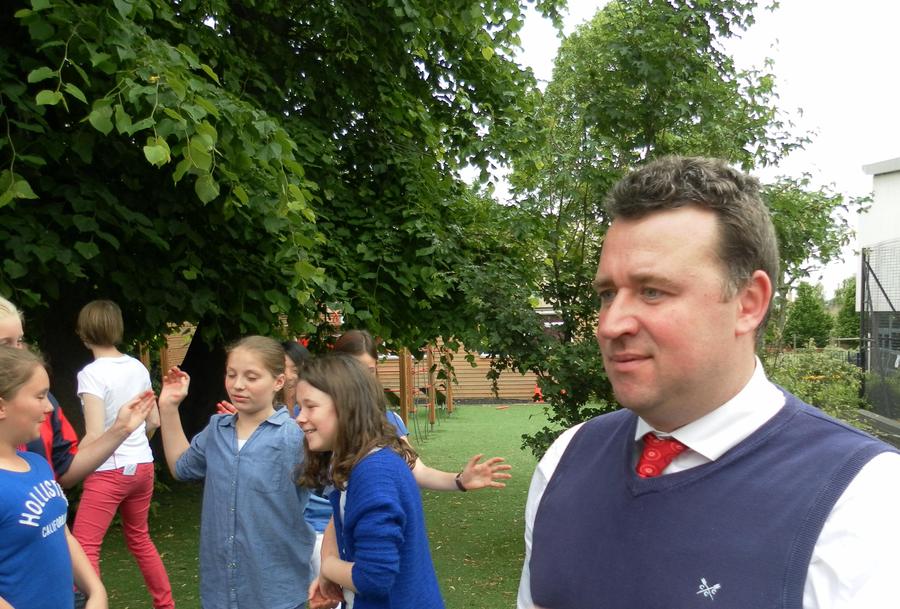 The children took part in some fantastic projects and activities culminating in an Olympics Enrichment week at the end of June.  Each year group represented a country at the opening ceremony on Monday 25th June, standing to hear their adopted national anthem and passing Marshgate’s Olympic torch from hand to hand until the week was declared officially open by Ms Jackson.  The children then spent the week learning about the Olympics, their class’s chosen country and indulging in activities ranging from Samba drumming to designing their own Olympic sports.

Other activities included some of the children in the choir attending an Olympic cultural extravaganza at St. Mary’s University celebrating dance, singing and poetry with children from over thirty other schools in Richmond. Other pupils took part in an Olympic poetry competition at the Russell School.  Some lucky children were taken to the Riverbank Arena in the Olympic Park to see the Women’s hockey; GB vs. the Netherlands. 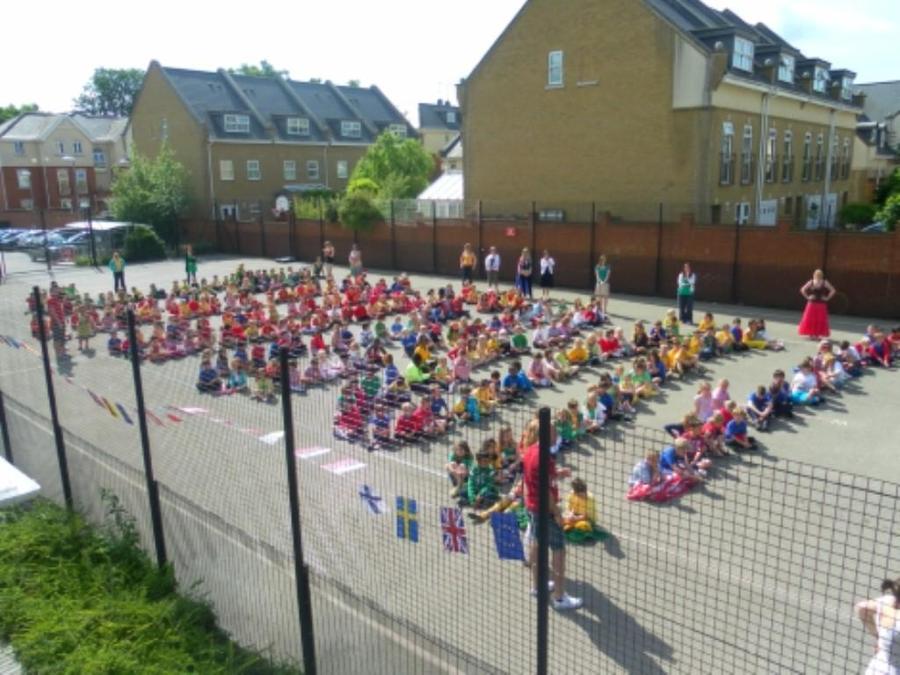 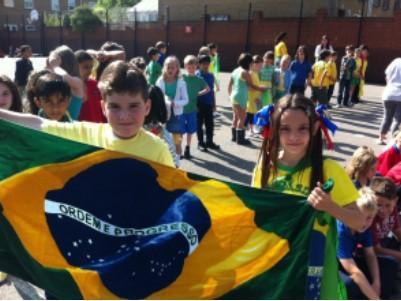 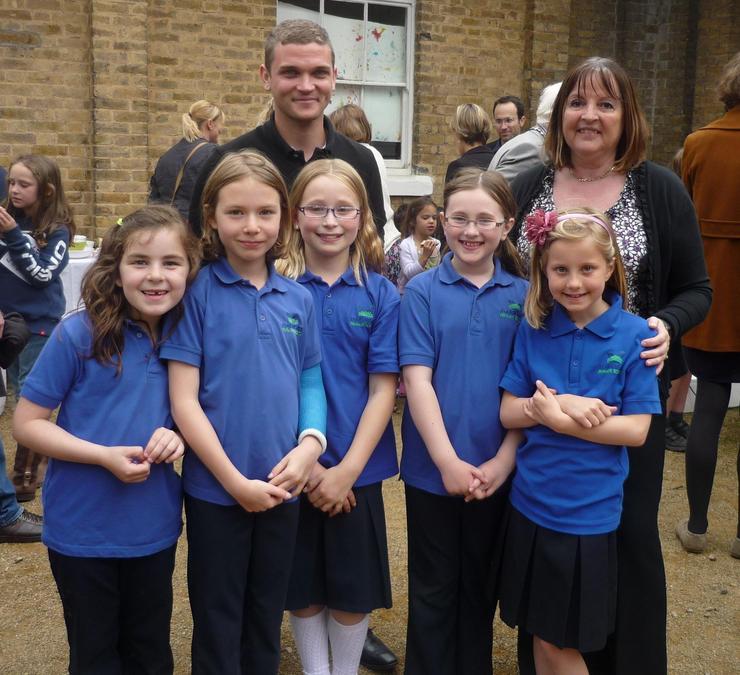 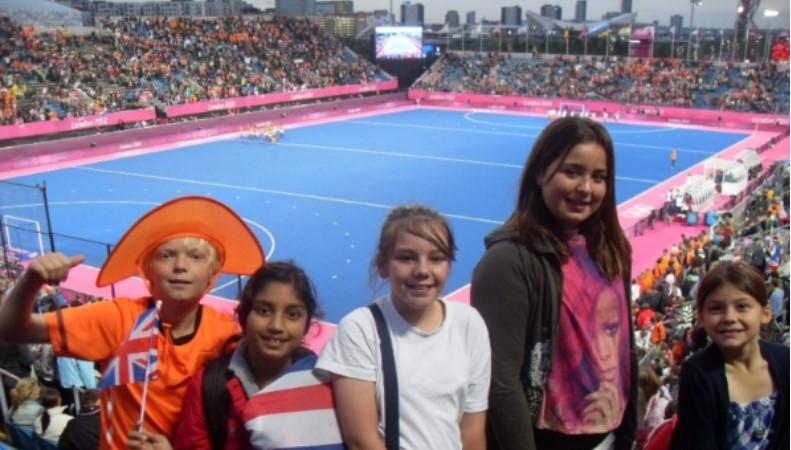 Marshgate was awarded Gold Science Award, a national science award for excellent science teaching and learning.  Mr Farrelly, pictured here with Miss McClenning, went to collect the Primary Science Quality Mark Gold award at the Royal Institute. The national award recognises that the science teaching and learning at Marshgate is of the highest quality and children all participate, enjoy and achieve outstanding results in science. 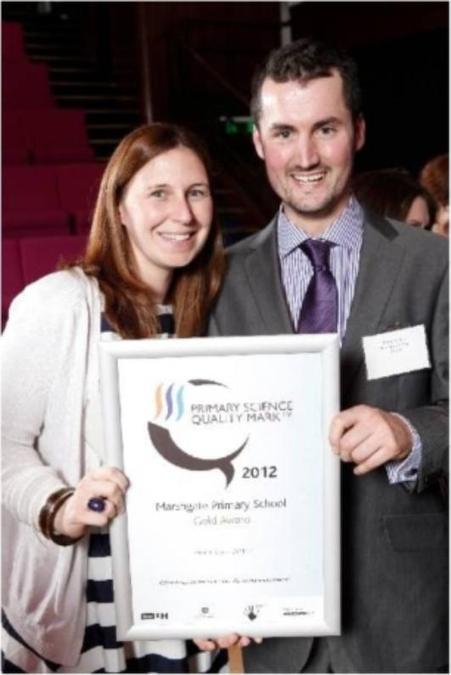 July 2013
We celebrated our ten-year anniversary this month with a range of guests, parents, governors, former pupils and staff from Marshgate at a very special event.  It was a lovely afternoon with performances, speeches and songs.  We also unveiled the new mosaic mural by the Queen’s Road entrance.  The day culminated with a picnic in the school grounds.  Thank you to everyone involved for organising such a wonderful afternoon and to Vicki Sharp for the lovely photos.

Working together with Holy Trinity Church in Richmond, Marshgate became involved with a charity called Karis Kids, an organisation which brings hope to children orphaned by AIDS in Uganda, by placing the children within adoptive local families and strengthening the capacity of those families to look after them.  Marshgate sponsored one of these families living in Kampala, Uganda.  In May 2014 two members of staff Mrs Brooks and Miss Crampton travelled to Uganda with a delegation from Holy Trinity Church to meet the families.

At this time, we also fostered international links with a school in Pondicherry, India.  Three of our teachers, Mr Farrelly, Mrs Flavin and Mr Aylett, were lucky enough to visit our Indian partner school, Achariya Siksha Mandir, for a week at the end of February 2014.  They were welcomed very warmly by all staff and students.  They said it was a joy to see children on the other side of the world learning in a similarly nurturing environment to Marshgate.  The teachers shared their journey with the whole school in assemblies and introduced a few new ideas such as children wearing their own clothes instead of school uniform on their birthday.  A tradition that is very popular and continues to this day.

At the start of July Marshgate was delighted to welcome the principal, primary Headteacher and international co-ordinator from Achariya Siksha Mandir, our Indian link school.  They were welcomed by fabulous assemblies involving our string ensemble, recorder group and school choir and spent the week visiting every year group to learn from the work we do at Marshgate. 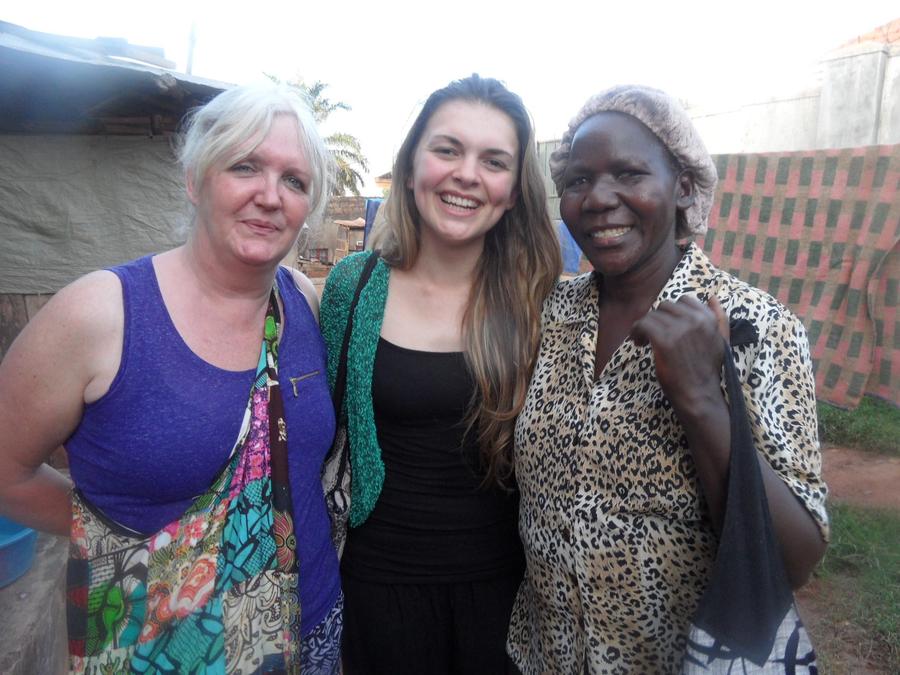 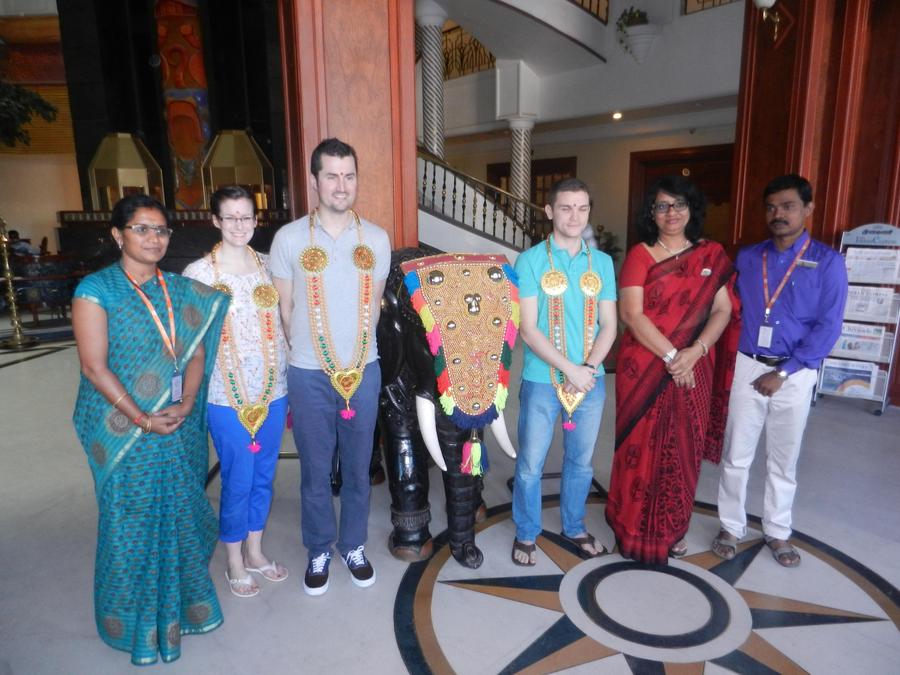 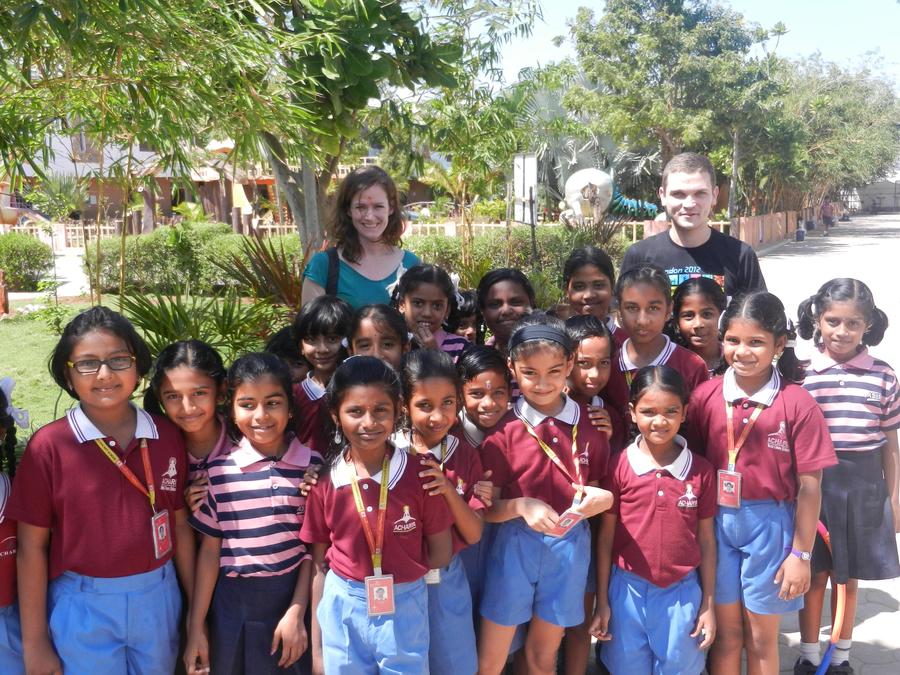 In response to the Ebola epidemic in Africa the children on the School Council came up with ideas to raise funds.  The Bring and Buy Sale for the children raised a total of £547.30.  Children were asked to bring in a toy they no longer wanted and £1.  In return, they could go to the school hall and buy a new toy.  As the photos show the children really enjoyed this.  The combined efforts from the Crazy Hair day, donations raised after the Christmas performances and the Bring and Buy sale was an amazing £1,553.30.  Thank you to everyone involved. 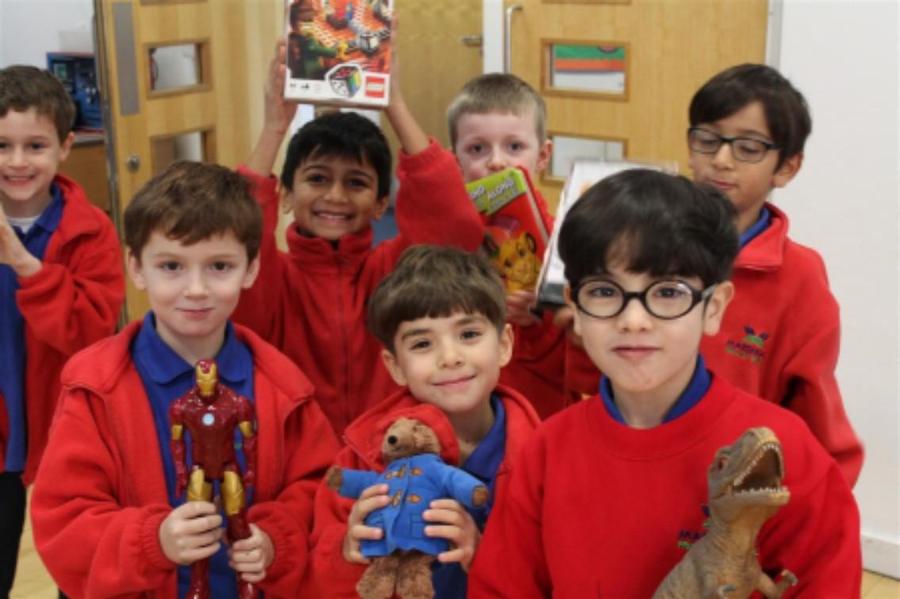 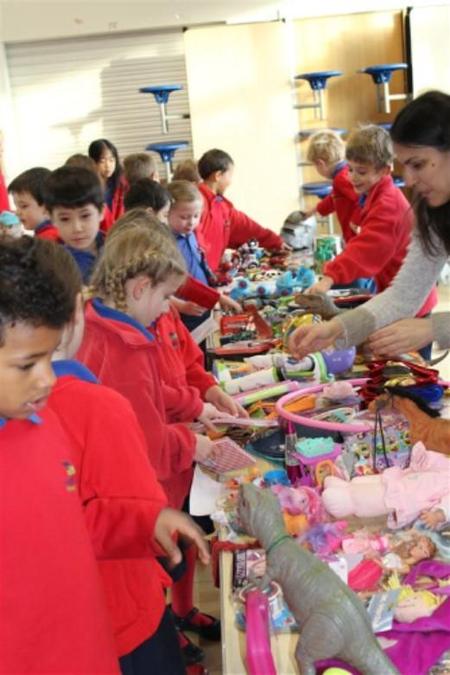 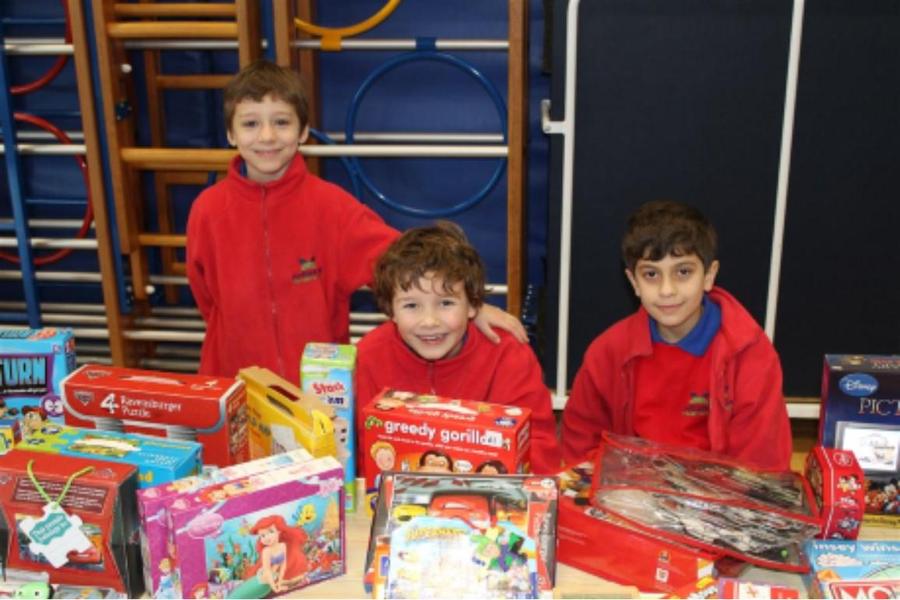